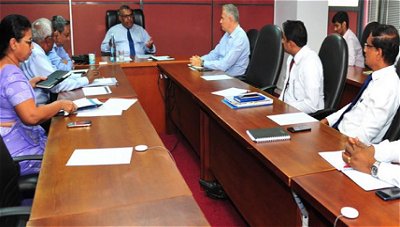 During his first discussion with the industry representatives last week, the Chairman, who himself is an outstanding exporter from the country’s rubber industry, acknowledged the industry’s contribution in terms of its significant value addition.

Subasinghe added that the sector has the potential to increase its export income substantially and pledged the EDB’s fullest support to the initiatives of the rubber industry.

Sri Lanka Association of Manufacturers and Exporters of Rubber Products (SLAMERP) envisage increasing the turnover of the rubber industry to US$ 4.4 billion by 2025 as per the industry master plan 2017-26.

In this regard, Rohan Masakorala, Director General of SLAMERP, highlighted the necessity of boosting natural rubber production in Sri Lanka as the current local production is sufficient to meet only 50% of the industry’s requirement. He explained the importance of encouraging small holders to follow proper fertilizer practices, use rain guards, and adopt early tapping in addition to carrying out replanting on time.

Sharing similar views, Koenraad Pringiers, CEO, Camso Loadstar, stated that it is critical to change the mindset and attitude of farmers by educating them about the significance of enhancing productivity and increasing yields to safeguard the interest of both themselves and rubber manufacturers.

Adding her views about the increase of productivity in rubber plantations, Chitranjali Dissanayake, Director – Industrial Products of the EDB, was optimistic that the series of workshops conducted by the EDB together with the Rubber Development Department and Rubber Research Institute (RRI) – 2 workshops were held in Kegalle and Moneragala in 2019 - to give smallholder farmers necessary awareness and knowledge on productivity improvement through adaptation of modern technology would come into fruition to benefit rubber exporters.

Meanwhile, describing the constraints faced by rubber manufacturers, Masakorala brought to the attention of EDB Chairman that factories located, particularly in Gampaha district (including BOI zones), are unable to expand and launch new projects, as the CEB substations are not having the required capacity. Subasinghe agreed to take up that issue with the BOI to remedy the situation.

“The EDB under my leadership is working quite closely with the BOI. A joint committee, which is made up of the selected officials of both organizations, has been established to attract export-oriented foreign direct investments”, he disclosed.

Industry representatives also proposed to expedite the process of issuing license and clearance certificates to ease the restrictions enforced on import of friction core and tire crumb used in the solid tire industry. They also mentioned that it is imperative to upgrade the testing equipment in the RRI to facilitate local manufacturers to compete in the international market. The officials of Trellerborg Lanka, Industrial Clothing, Lalan Rubbers, and Dipped Products attended the meeting from the industry while Assistant Directors Susantha Premarathna and Diani Madhuka too joined the discussion from the EDB.