This fish is ‘king of the reef.’ But high-end diners may change that. 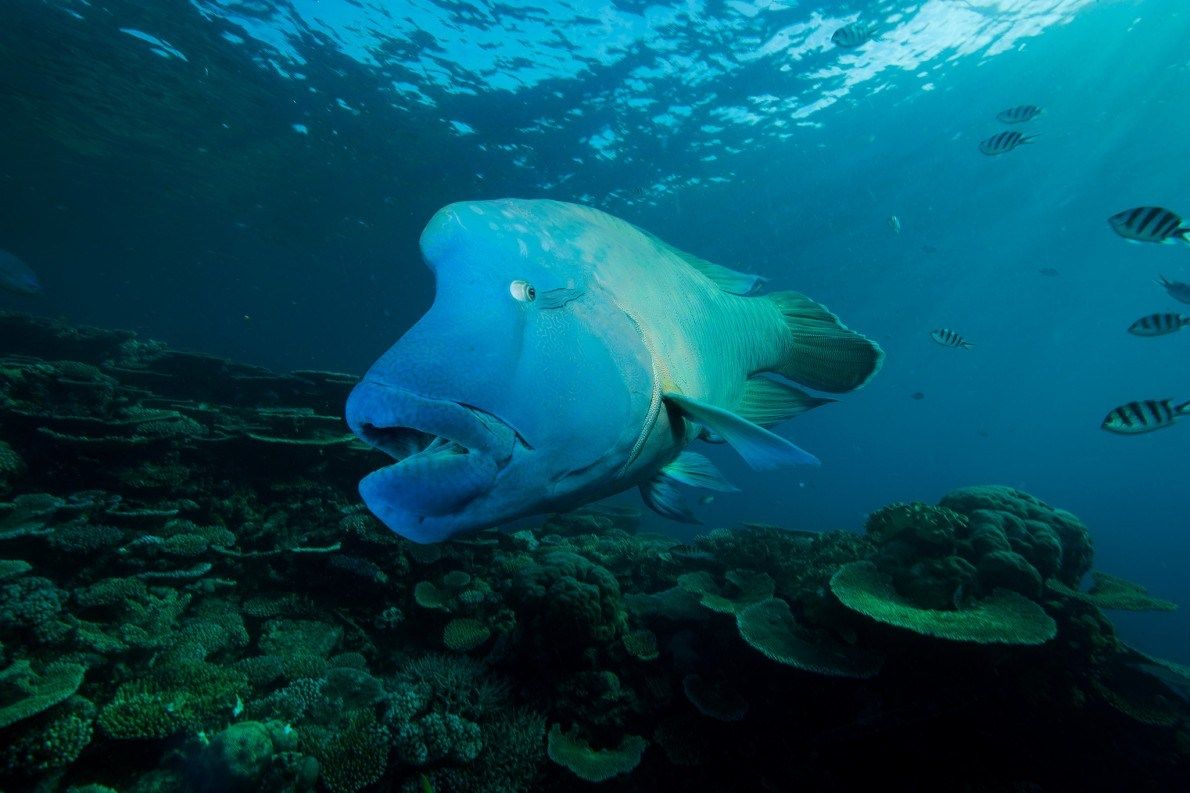 The luxury live reef fish market threatens the humphead wrasse. Could its unique “eyelashes” help save it?

It’s the king of the coral reefs. The humphead wrasse, fittingly named for the bump on its head, can grow to six feet long, weigh up to 400 pounds, and live for 30 years.

Also known as Napoleon wrasses, these giants are things of beauty, with diamond patterning, varying green, blue, and yellow scales, and distinctive “eyelashes”—black diagonal lines behind each eye. The fish live in tropical waters of nearly 50 countries, from the coast of East Africa to the Pacific Ocean.

But they’re disappearing because of their reputation for being delicious. They’re considered a luxury food in Hong Kong, where per capita fish consumption is among the highest in the world, according to the marine environmental nonprofit Bloom Hong Kong.

Fishing for humphead wrasses has intensified in recent years. In 2004, the International Union for Conservation of Nature (IUCN), which sets the conservation status of species, upgraded the fish from vulnerable to endangered. Also that year, the Convention on International Trade in Endangered Species of Fauna and Flora (CITES), the body that regulates cross-border commerce in wildlife, set more stringent regulations to protect the species from overexploitation. Many countries where humpheads are found have banned their trade, but Indonesia—whose waters encompass about a fifth of the humphead's range—allows 2,000 to be exported each year, a number some experts worry is too high.

Yvonne Sadovy, a professor at the University of Hong Kong’s Swire Institute of Marine Sciences and co-chair of the IUCN’s grouper and wrasse specialist group, says it’s unknown how many humpheads remain in the seas or what their rate of decline has been. What is well known is that the ecologically important Coral Triangle, encompassing a significant part of the humphead’s range, is threatened by overfishing.

Unlike elephants, humphead wrasses don't get a lot of publicity, but they’re “in probably a worse state of trouble,” says Colman O’Criodain, the World Wildlife Fund’s policy manager for wildlife. Sadovy, who led recent humphead wrasse population surveys, says the fish were so scarce that “we were really quite shocked.” She also hears from divers and biologists that they no longer see mature humpheads in the wild.

The fact that humpheads are scarce in the wild, despite protections, is evidence of illegal fishing and trading, but ascertaining the scale of the illegal trade is very difficult. Online trading platforms such as the Chinese ecommerce sites TMall and Taobao can facilitate illicit trade, Sadovy says. Social media, chat rooms, and WhatsApp groups, make it “much harder to detect,” O’Criodain says.

The lack of tracking for humpheads motivated Sadovy to create a tool that could be used by both authorities and the public. In what would be a first for fish, facial recognition technology uses the fish’s unique eye marks to determine if a humphead was imported legally. Working with a developer, she created Saving Face, a smartphone app that would enable diners, restaurateurs, and endangered species enforcement officers to compare a photo of a humphead wrasse for sale at a restaurant or market to photos in a database of legally.

The app is still in the testing phase, Sadovy says. She hopes Hong Kong will help promote the app and that it will empower people to be consumer watchdogs and help stop the selling of illegal fish. She says a growing number of restaurants in Hong Kong are intent on offering only legally sourced species that aren’t compromised in the wild, while consumers themselves are becoming more aware of beleaguered species they should avoid eating.

For the app to have a real impact on the illegal trade, Hong Kong would need to have enough inspectors at its ports to photograph each imported live wrasse to register in the app’s database. Further, there would need to be widespread adoption of the app by restauranteurs who buy the fish from wholesalers and restaurant diners. Then if the app does raise questions about the legality of a fish, app users would need to take it upon themselves to report the lack of facial matches to endangered species enforcement officers, who would need to prioritise following up on those reports.

The Hong Kong government needs to make more effort to educate and raise awareness among the public, the hospitality industry, and seafood traders, Sadovy says. “I think there’s a real need for education.”

From Indonesia to Hong Kong

Indonesia not only exports wild-caught humpheads but also ones raised in captivity, in the remote Anambas Islands and Natuna Islands. In 2018, for the first time, the country established an annual export quota of 40,000 for ranched humpheads. These are fish taken from the wild as juveniles and raised in pens. As with the wild fish, they’re shipped live, mostly to Hong Kong, to be kept in tanks in markets and restaurants until they’re sold for a meal (or die of other causes). This flood of humpheads into the market has made enforcement even more difficult, both because of the sheer number of fish and because there’s no way to distinguish between wild and ranched humpheads.

O’Criodain is worried that ranching may worsen the plight of these endangered fish. He says removing pre-reproductive-age wrasses from diminished wild populations may compromise their ability to rebound and that Indonesia doesn’t fulfill the CITES rule that trade in ranched humpheads is permissible only if it won’t undermine wild populations. “There's nothing about the overall size of the population and whether the take of these juveniles is sustainable in relation to that overall size,” he says. CITES also requires that a certain number of ranched fish be returned to the wild to bolster diminishing populations, but according to O’Criodain, Indonesia hasn’t declared its intent to do that.

The Indonesian Ministry of Marine Affairs and Fisheries, which oversees the trade in humphead wrasses, did not respond to requests for comment.

Hong Kong’s Agriculture, Fisheries, and Conservation Department issues fish import permits, manages trade in CITES-listed species, and carries out shipment inspections. Every Hong Kong humphead wrasse retailer must have a possession license, and it’s prohibited for vendors to buy and sell the fish from each other. But if humpheads are smuggled in with shipments of other fish they resemble—groupers, for example—they’re not officially documented.

As detailed in a 2016 report Sadovy cowrote for Traffic, a nonprofit that tracks the wildlife trade, the number of humpheads offered in Hong Kong’s markets and restaurants exceeds the official, legal number. Additionally, CITES records show that thousands of ranched Indonesian humphead wrasses are simply disappearing. In one instance, 8,000 ranched fish (with the proper CITES export permits) left Indonesia but never showed up anywhere else. “That disappearance means, because Hong Kong is quite good at reporting imports, that they're going straight into mainland China and not being reported,” Sadovy says.

At present, the Hong Kong Customs and Excise Department is more intent on checking vessels suspected of carrying drugs or goods such as cigarettes, smuggled in to avoid customs duties, than illegal wildlife, says Sophie le Clue, environment director with the Hong Kong-based nonprofit ADM Capital Foundation. She says inspectors generally search for illegal wildlife only if they’ve been tipped off ahead of time; then they call in the Endangered Species division of the Agriculture, Fisheries, and Conservation Department for law enforcement action.

Officials from the department declined requests for an interview but sent an extended statement. Among other things, they said that “Hong Kong is committed to the protection of endangered species [and] takes vigorous enforcement actions together with the Customs and Excise Department in combating smuggling of Humphead wrasse to ensure that the trade in Humphead wrasse is in accordance with CITES and local legislation [and] conducts inspection on local market from time to time and appropriate enforcement action would be taken if any irregularity is spotted.”

The Endangered Species division itself doesn’t have an investigative body. Neither it nor Customs and Excise likely has enough staff or resources to inspect and track all shipments of live fish, says Stanley Shea, Bloom Hong Kong’s marine director.

Sadovy says the Saving Face app will be available at no cost. Here’s how authorities and the public will be able to use it: When legally imported fish with proper documentation arrive in Hong Kong, Endangered Species division personnel will photograph them and upload the photos to a database connected to the app. When enforcement officers or diners want to check the legality of a humphead, they can take a photo of the fish and, using the app, ascertain whether it matches one recorded in the database. If it doesn’t, they can use the Endangered Species division’s public reporting phone line to alert authorities.

According to Sadovy, a pilot project tested in the spring of 2019 showed that the app had a 70 percent match accuracy rate. She and the developer are now working on improving the accuracy rate, as well as enabling a desktop and cloud version that would make the system useful for high-volume import inspections. They plan to launch this in June.

Despite the limited number of Endangered Species division inspectors, Sadovy says the Agriculture, Fisheries, and Conservation Department has committed to using the app to process all labeled imports of live wild humphead wrasses. Ranched wrasses, however, make up the majority of imports, and it’s far from clear whether Hong Kong would have the staff to process those as well in the future.

Anil Jain, professor of computer science and engineering at Michigan State University, in East Lansing, whose biometrics lab developed a facial recognition system for primates, says the tool is promising but imperfect. Environmental factors such as cloudy water or bad lighting can affect image quality and compromise accuracy.

Eventually, with sufficient data, Sadovy envisions that the app could be used as a tool to combat trafficking of other wildlife besides humphead wrasses. "If there’s enough sample data,” she says, “enforcers could use this for all sorts of imports.”