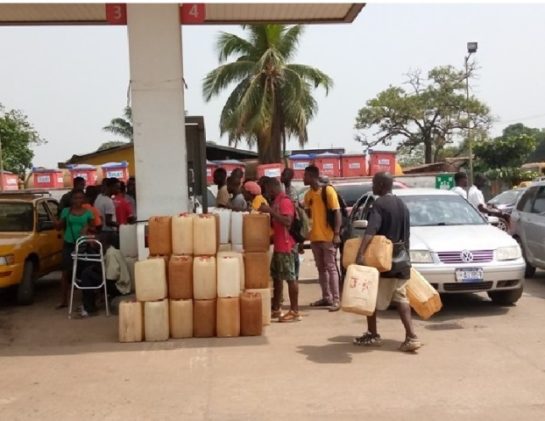 Even though the reduction of the price of the commodity is international, but back home in Liberia the commodity which is vital in the day to day growth of the economy has been challenge as the price of it became unbearable to many when the price grew so rapidly as high as Three Thousands Liberian Dollars or Twenty United States Dollars.

At one point, the CDC-led government as a result of the high price of the commodity and its shortage on the Liberian market almost collapse, which led to the complete halt of non-movement of dozens of vehicles, paralyzing business activities including some students missing their classes due to the lack of vehicles to take them to their various campuses.

After Liberians experienced two successive gasoline crises here, a new crisis has emerged in the sector-this time pricing disparities have hit the industry undermining the traditional petrol pump station sat least as some claim. But Liberians are becoming to enjoy it as they pay cheap for the product.

While, a gallon of gasoline is selling at a traditional petrol pump station at a government approved price of US2.95 (LRD 580), the price of the commodity on the black market is selling between US2.00 and US2.15 (LRD 400 and LRD430) much to the discomfort of some importers.

In an ideal free economy where the law of supply and demand takes shape, the situation could be considered as an excess supply or economic surplus that is working to the delight of the consumers, but in this case, there are claims that those selling below the approved government prices are evading taxes.

Commerce Minister Wilson Tarpeh could not confirm or deny if that was the case, he rather told this paper that the concern surrounding the gasoline price disparities on the local market is something that has claimed the government’s attention. “We have taken siege of the matter and are in discussion with importers to see how we can harmonize the price to stabilize it for the long term,” Minister Tarpeh said.

Petrol pump attendants at various stations on conditions of anonymity told this paper that they have been confronted with the issue by customers. But they claimed that their bosses bought at higher prices before it became surplus on the market.

Some think the products being sold at prices lower than the government approved price is because most of the importers are not paying the required taxes and therefore can afford to sell at such low prices.

This paper learned that to address this issue government is contemplating on granting import license to only importers that own and operate pump stations. As it currently stands most of the importers do not have their own pump stations and therefore would sell at any price thereby bringing confusion in the industry.

It could be recalled that between January 30 and early April this year, Liberia experienced two successive gasoline crises with some blaming poor port infrastructure and sloppy bookkeeping.

Commerce Minister Tarpeh is on record as saying that the first crisis was as a result of incorrect fuel-reserve figures.