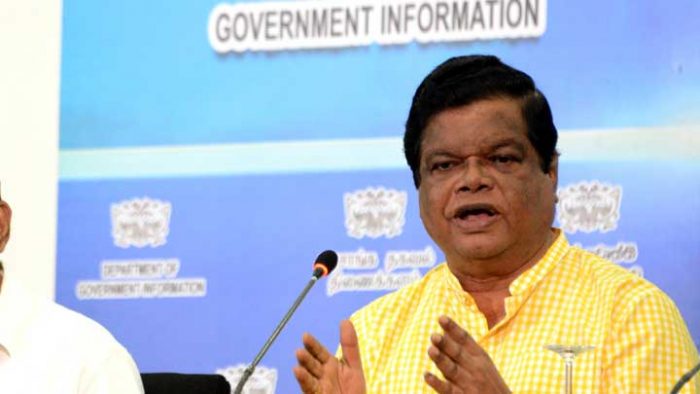 Sri Lanka’s has slapped import controls multiple ways to face the ‘biggest forex crisis in history’, Information Minister Bandula Gunewardene said as the central bank tens of billions of rupees in March and April driving excess rupees to the highest level since its creation.

“This is the reason the Cabinet approved the import restrictions.”

Sri Lanka has a trade deficit because people earn money from services exports, as tourism, remittances and information technology exports and spends them on hard goods.

Government net foreign borrowings spent to build roads, airports or even pay salaries will also trigger imports, but not a currency crisis.

Foreign direct investment when used to build factories will also trigger more imports and widen the trade deficit, but there will be

In the absence of money printing, the expansion of the trade deficit from either remittances, tourism receipts, or net foreign borrows take to finance the deficit, needs to trigger any depreciation.

In the same way when exports fall, and companies cut salaries to workers and do not have profits to invest or save imports will also fall unless credit is taken backed by central bank re-finance (printed money) to pay salaries or cover losses.

The concept that falling foreign earnings will lead to a consumption and investment fall that will reduce import and will have no impact on the exchange rate in the absence of money printing is a difficult concept for many people in soft-pegged countries to grasp, analysts say.

“Due to the Covid-19 pandemic many exports are down,” Gunewardene said. ” About 5 billion dollars of exports are from textiles. Tourism is also down. Remmittances are also down.

“If we allow the outward outward flows to go as before the rupee will fall,” Minister Gunewardene claimed.

“If it goes to 250, 350 rupee we will not be able to live in this country. There will be cost of living that no one will be able to bear.

“So this intervention (import controls) is part of a macro-economic management to keep the value of the country’s money stable, promote import substitution and domestic agriculture.

“It is done on the need to stop imports flowing in freely and build a domestic economy.”

There is no divine intervention or voodoo through which other countries attained monetary stability and halted balance of payments problems.

There have been calls to reform Sri Lanka’s central bank to stop forex shortages and draconian exchange controls that started shortly after 1951 with the creation of an unstable soft peg.

The central bank printed tens of billions of rupees in March and April to over-issue money in excess of a Coronavirus driven drawdown of cash, and the rupee fell to 200 to the US dollar from 182 under a so-called flexible exchange rate. It has since recovered.

After some interventions and a consumption and credit collapse driven by Coronavirus curfews as well as the controls, the rupee has stopped falling.

Under controls issued this month under an import control law enacted in 1969 which was widely used in Sri Lanka to run the ‘closed economy in 1970s’ after the US dollar collapsed leading to the break-up of the Bretton Woods system of soft – pegs some goods are completely banned.

When the US dollar collapsed against gold amid money printing, President Richard Nixon also slammed a self-imposed trade embargo called the Nixon shock.

The US usually imposes trade embargoes on countries like Cuba or Iran, to cripple them, not itself. Sri Lanka however completely closed the economy in the 1970s and crippled itself.

Following the collapse of the dollar, Mercantilists and Keynesians lost influence in the US and under President Reagan the Fed was reformed. Similar reforms were carried out at Bank of England and exchange controls were lifted.

Under the Sri Lanka import control gazette some goods can be imported without any restriction by paying a tax, others can be imported under license, other can be brought under three month suppliers credit.

Other good which are not essential but needed can be brought at high taxes, Minister Gunewardene said.

Trade controls, which are a type of self-imposed trade embargo can severely hit the supply chains of domestic firms and strangle economic activity.

Already companies are warning of being hit by trade controls. Minister Gunewardene said those affected by the trade controls can make appeals.