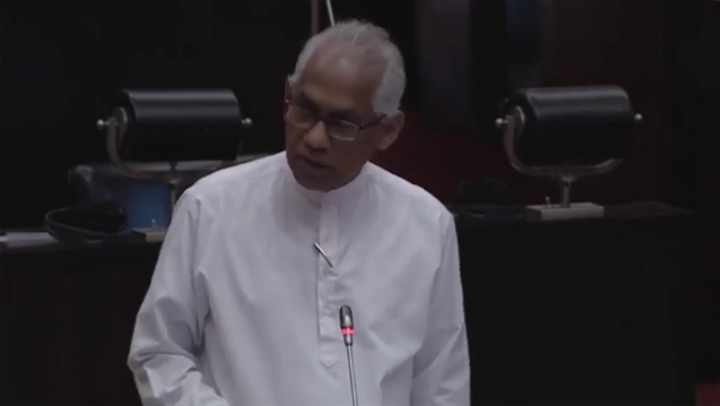 ECONOMYNEXT – Sri Lanka’s import controls which has left the economy mired in a plethora of regulations does not solve underlying economic problems in the country, opposition legislator Eran Wickremaratne said.

Interest rates were being held down artificially and it was hurting savers and pensioners who had savings.

Wickremeratne, a former state minister for finance said foreign reserves were falling and it was being boosted with swap contracts.

He said interest rates were being controlled on the basis of Modern Monetary Theory and large volumes of money had been printed.

Sri Lanka’s foreign debt was one of the highest among middle income countries.

“When we delay corrective policies, the country will get into greater difficulties,” he warned.

Budget deficits had been understated by moving away from cashflow based accounting, he said.

Government revenue were fallen and revenues were being lost due to various tricks with gazettes. A sugar scam involving sudden tax changes may have cost 11 billion rupees to the Treasury he sad.

Wickremeratne, said in the 1970s a closed economy showed the failure of a controlled economy.

“At the time a license was needed to get new clothes for a weeding,” Wickremeratne said. “The controls and conditions also create unrest among the youth.”

In the 1970s the central bank was printing large volumes of money as it could not enough Treasury bills to real buyers.

The central bank was purchasing large volumes of money by rejecting bids at bill auctions.

In the 1970s the draconian exchange and import controls were placed after printing money, bringing many economic activities to a standstill.

“The Treasury had to finance its expenditures increasingly by resort to Treasury bills despite the fact that no significant tenders forthcoming to absorb the successive issues of Treasury bills,” an economist at the central bank had written in the monetary authority’s 25th anniversary publication.

“The responsibility of absorbing the unsubscribed portion of the Treasury bill issue fell on the central bank.

“A major drawback in financing of budget deficits with central bank credit is that while the process involves an expansion in the money supply, it is not necessarily accompanied by an expansion by a corresponding increase in national product.

“Consequently, increased demand emanating from central bank financing of budget deficits had to be satisfied by increased recourse to foreign supplies with resulting pressure on the country’s external payments.

“With the continued loss of reserves and the accumulation of external liabilities, the ability of the Central Bank to maintain the international value of the rupee was gradually undermined.”

Wickremeratne said inflation was going up and energy prices were also showing signs of moving up.
The US Federal Reserve under Jerome Powell was also printing record volumes of money, and there have been warnings of a new commodity bubble like in 2007.