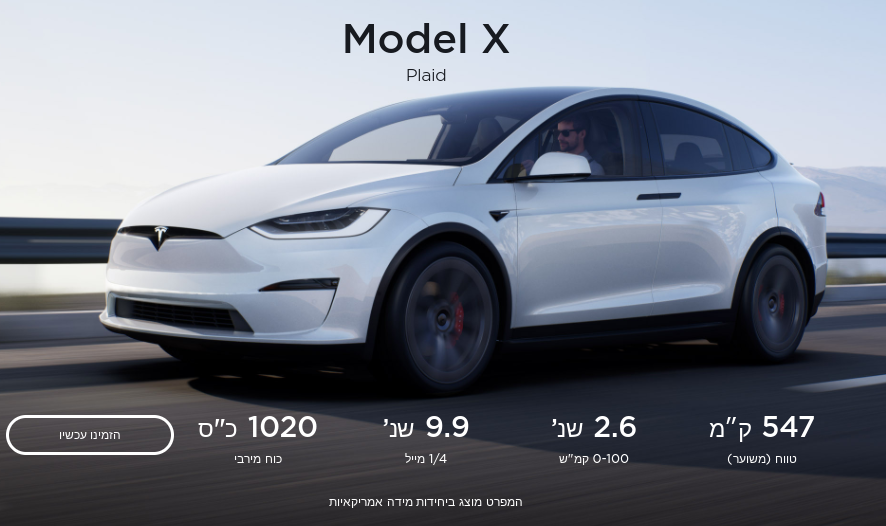 Tesla has entered the Israeli market with prices that were lower than expected, HAARETZ reports. Tesla’s Hebrew site shows that customers can take delivery of their vehicles in March and reflects Tesla’s plans to target the mainstream market.

Tesla has entered the Israeli market with prices that were lower than expected, HAARETZ reports. Tesla’s Hebrew site shows that customers can take delivery of their vehicles in March and reflects Tesla’s plans to target the mainstream market.

The Model S starts at 320,000 shekels, which translates to $97,300, and will be available in November. That price includes the latest versions of the new Model S Plaid and the refresh.

The article noted that Tesla included price listings with and without taxes which is probably pointing out the high tax rate on Israeli vehicles. Before the taxes are applied, the Model 3 started at 122,000 shekels or $37,105.

The article also pointed out that Tesla isn’t going after the luxury market. Instead, it’s focusing on brands such as Hyundai, Mazda, and Skoda and aims to force electric car importers and players in the market to change their strategy if they want to compete with Tesla’s cunning technological edge.

If we look back over 2020, we can see how Tesla was laying out its meticulous plans to enter Israel and that these plans are now coming to life. In April of 2020, we noted that Tesla could be launching in Israel soon.

Following that, Tesla began hiring in Israel back in November of 2020. The company was looking for a country manager to take charge of the local market who would hire local employees, work with the Israeli government, and engage suppliers to set up the market. That candidate is also responsible for the “strategic design of our charging infrastructure footprint in the market to enable sales and engage customers.” As you can see from the viewpoint of 2021, Tesla’s plans are progressing. Last month, Tesla obtained its commercial import license in Israel, with online sales then starting within days.

And next month, or perhaps in April — one year after that first article about Tesla moving into Israel — we will probably be reporting more on Tesla’s progress, including sales of the Model 3 there. The future is exciting, for sure, and soon Israel will have more Teslas on its roads bringing the country into that future.