In Trade War Between Israel and Palestinians, Losers on Both Sides 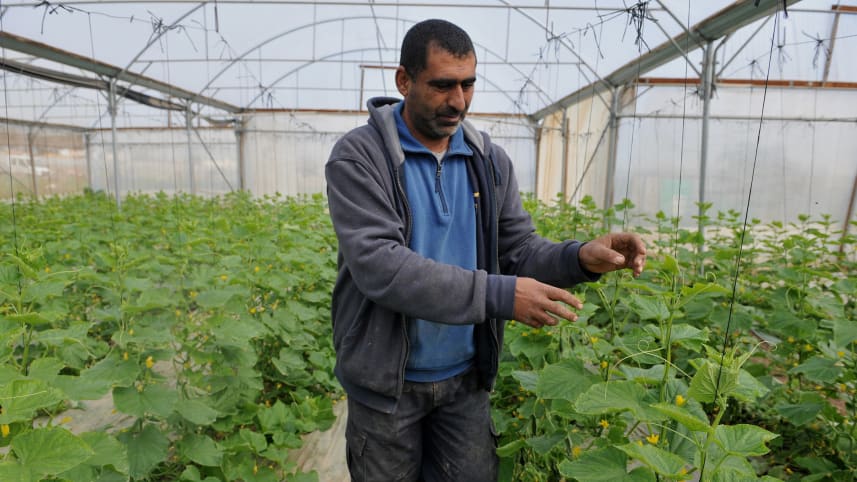 New Israeli and Palestinian import restrictions are causing produce prices to plummet and rise on both sides of the border.

Ehab, a Palestinian produce vendor from the Jordan Valley who owns a stand on Route 90, witnessed a strange event a few days ago. A car with a trunk full of bananas drew extraordinary attention from sellers who gathered around, vying to buy 10 kilograms (22 pounds) of what has become a scarce and expensive fruit.

The bananas were still attached to their stalks and hadn’t been packed into cartons bearing the usual Hebrew labels. Dealers quickly snapped them all up, paying 7 shekels ($2) a kilogram. In the past, Ehab says, a kilo cost 1.5 shekels. These bananas were smuggled from Israel into the West Bank in a car with Israeli license plates, evading a checkpoint inspection, Ehab said.

Bananas became a luxury item in the West Bank after Defense Minister Naftali Bennett last month banned all agricultural imports to Israel from the West Bank. The Palestinian Authority responded in kind, prohibiting produce imports from Israel. Much of the fruit sold in the West Bank is imported from Israel; the ban caused a jump in prices. Israel also suffers from the restrictions. Yaron Belhasan, head of the Israeli Fruit Growers Association, said Israel usually exports 500,000 tons of fresh bananas to the West Bank and the Gaza Strip every week.

The trade war began a few months ago, when Palestinian Prime Minister Mohammad Shtayyeh decided to stop the import of calves from Israel as part of an attempt to reduce the PA’s economic dependence on Israel. Data from Israel’s Coordinator of Government Policy in the Territories) show that some 10,000 calves were exported to the West Bank and Gaza each month, accounting for about 60 percent of meat consumption in the territories. Israel reacted with sanctions against the PA, including revoking the trade credentials of Palestinian businessmen, and barred the Palestinians from importing calves from any other source.

The parties reached a new arrangement to resume the livestock imports. One month later, 3,000 calves were exported from Israel to the West Bank. Israeli farmers were dissatisfied, however, claiming that farmers with ties to the PA were being favored. In response, Bennett halted all produce imports from the West Bank pending the PA’s agreement to change its system of issuing permits.

Balahsan says the trade war has led to Israel being flooded with bananas, whose prices have dropped from 4 shekels a kilogram to 2 or 2.5. Israel consequently said it would bar Palestinians from exporting their produce to Jordan.

The restrictions have also cut sales of Palestinian produce to Israel. Mohand, a Palestinian farmer and father of seven from Bardaleh, in the Jordan Valley, says that “before Bennett’s decision I sold a carton of cucumbers for 60 shekels, and now the price is only 25 shekels.”